Patrick Shaw-Stewart: 'I saw a man this morning' 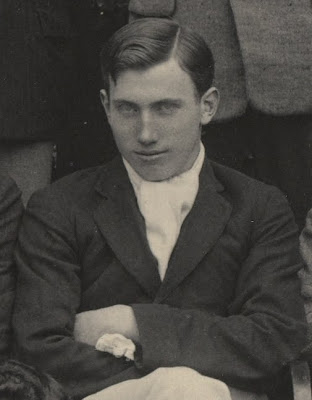 Elizabeth Vandiver's brilliant forthcoming study, Stand in the Trench, Achilles: Classical Receptions in British Poetry of the Great War, takes its title from the penultimate line of Patrick Shaw-Stewart's 'I saw a man this morning'. I ought to wait until the official publication date (18 February 2010) ticks past before saying very much about Vandiver's book, so by way of drumroll I will focus on Shaw-Stewart's poem. It seems to have been his only poem, found after his death written into his copy of Housman's A Shropshire Lad.

Shaw-Stewart was an Old Etonian, and a Classics scholar of legendary genius. Vandiver makes the point enjoyably and in revealingly excessive detail when she quotes at length a letter which Shaw-Stewart wrote to the most celebrated beauty of her age, Lady Diana Manners. Explaining how Lady Diana might enjoy sexual relations with him while preserving her virginity, Shaw-Stewart has recourse to the Classics, quoting liberally (in what Vandiver calls 'ascending order of erotic satisfaction') various sexual practices as described in Aristophanes, Theocritus and Ovid. It seems that much of this may have been lost on Lady Diana, who did not have the Greek or Latin to be able to translate. Perhaps she asked her parents.

Shaw-Stewart sailed on the Grantully Castle to the Dardanelles with Rupert Brooke, and served in Brooke's burial party. Like many public-school-educated men of his generation, he welcomed the idea of fighting at Gallipoli: 'It is the luckiest thing and the most romantic. Think of fighting in the Chersonese... or alternatively, if it's the Asiatic side they want us on, on the plains of Troy itself! I am going to take my Herodotus as a guide-book.' Shaw-Stewart survived Gallipoli, but was killed in France on 30 December 1917.

Vandiver convincingly dates 'I saw a man this morning' to 13 July 1915, because of the reference to 'three days' peace' on the island of Imbros. Shaw-Stewart was unexpectedly recalled from leave that day, having spent three days on Imbros.

I saw a man this morning
Who did not wish to die:
I ask and cannot answer,
If otherwise wish I.

Fair broke the day this morning
Against the Dardanelles;
The breeze blew soft, the morn's cheeks
Were cold as cold sea-shells.

But other shells are waiting
Across the Aegean Sea,
Shrapnel and high explosive,
Shells and hells for me.

O hell of ships and cities,
Hell of men like me,
Fatal second Helen,
Why must I follow thee?

Achilles came to Troyland
And I to Chersonese:
He turned from wrath to battle,
And I from three days' peace.

Was it so hard, Achilles,
So very hard to die?
Thou knewest, and I know not---
So much the happier I.

I will go back this morning
From Imbros over the sea;
Stand in the trench, Achilles,
Flame-capped, and shout for me.

The allusion in the final lines is to Homer's Iliad --- the passage beginning at 18.203 --- in which Athena sets a golden cloud around the head of Achilles and kindles a fire from it: 'He stood there and he shouted... and he raised immense confusion among the Trojans'.
Posted by Tim Kendall at 08:44