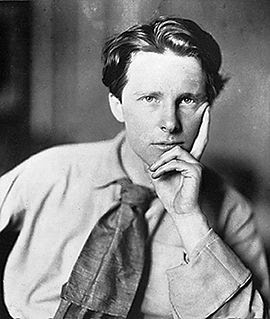 Away on a research trip, I missed Rupert Brooke's birthday on 3 August, so I offer belatedly his sonnet, 'Peace', by way of recompense. At his best, Brooke was a superb poet, despite the common travesty of his work as foolishly innocent. This was a man who, after all, had fought in the defeat at Antwerp, and witnessed the devastating effects on the civilian population. His sense of duty was born out of experience of suffering and of watching others suffer, not out of ignorance.

Brooke's five sonnets titled '1914', beginning with 'Peace' and ending with 'The Soldier', are acts of persuasion and explication, and as such, their first audience is Brooke himself. More powerfully than any of his fellow soldier-poets, Brooke accounts for his decision to enlist. Compare, on a similar theme, Edward Thomas's revealingly muddled 'This is no case of petty right or wrong', or Wilfred Owen's grand (and nonsensical) self-portrayal as a 'conscientious objector with a very seared conscience'. Brooke's own verse is also marred by rhetorical afflatus, but we hear its faults clearly because we are unwilling to share its assumptions. The vast majority of his contemporaries had no such problem. Brooke's poems were far more popular among soldiers, throughout the war and for decades afterwards, than were those of dissenters like Owen and Sassoon.

Brooke wrote 'Peace' in late 1914 after the evacuation of Antwerp.

Now, God be thanked Who has matched us with His hour,
And caught our youth, and wakened us from sleeping,
With hand made sure, clear eye, and sharpened power,
To turn, as swimmers into cleanness leaping,
Glad from a world grown old and cold and weary,
Leave the sick hearts that honour could not move,
And half-men, and their dirty songs and dreary,
And all the little emptiness of love!

Oh! we, who have known shame, we have found release there,
Where there's no ill, no grief, but sleep has mending,
Naught broken save this body, lost but breath;
Nothing to shake the laughing heart's long peace there
But only agony, and that has ending;
And the worst friend and enemy is but Death.
Posted by Tim Kendall at 20:19