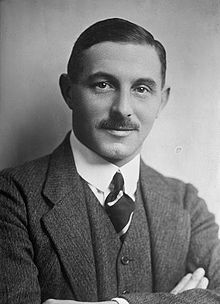 While putting the finishing touches to my anthology of First World War poetry for Oxford World's Classics, I have been neglecting this blog. What better way to make amends than by starting a series of posts focusing on those poets who have been narrowly excluded from the anthology? I decided at an early stage that I would give generous coverage to a smaller number of significant poets, rather than trying to create an omnium gatherum of versifiers and poetasters. Even so, an anthologist always has regrets about the borderline cases, and this blog seems like the right place to seek expiation.

Gilbert Frankau (1884-1952) has hovered at the edges of the war poetry canon for many decades. He is problematic for three reasons: he hated the Germans with an intensity matched only by his master, Rudyard Kipling; in 1933, he wrote an article for the Daily Express titled 'As a Jew I am not against Hitler' (but soon recanted); and there is the practical consideration that his wartime work remains in copyright in the UK. So, he is politically dubious, and his work comes with a price tag attached. The same is true (on both counts) of one or two other prominent war poets---Frankau was not alone among them in expressing support for Fascist leaders in the 1930s---but his work can be more easily ignored than theirs. As for copyright laws, the absurdity is compounded by the fact that his collected poems are freely available online here and here. Were I blogging from the US, I could include as many poems as I wanted in this post.

Frankau joined the East Surrey Regiment in October 1914, later seeing action at Loos, Ypres and the Somme. He became a regular contributor of poetry to the Wipers Times, and published two war volumes: The Guns (1916) and The City of Fear (1917). In October 1916 he was sent to Italy to counter German propaganda via press and film campaigns. Suffering from delayed shellshock, he was invalided out of the army in February 1918, and began a successful career as a novelist. He served as a squadron leader in the Royal Air Force Volunteer Reserve during the Second World War.

Frankau was a gifted and authentic poet, although the attitudes expressed in a lyric like 'The Beasts in Gray' ('Let the sword decide what the sword began: / "No truce with the Beasts in Gray!"') have not dated well. Having described a friend's torture at the hands of German captors, Frankau in 'The Reason' sums up his unambiguous animosity towards the enemy:

Hate! Not an individual loathing felt
For this one gaoler or the Kommandant
(With pardon and trade orders for the rest)
But absolute revulsion, merciless,
Inexorable, reasoned, and approved---
A plain man's hatred of the Unclean Folk.

It comes as no surprise that the last phrase sounds like something out of The Jungle Books. Here as in so much of his work, Frankau took his cue from Kipling: his boastful admission, 'I've learnt how to hate', is a direct response to Kipling's 'The Beginnings' ('When the English began to hate').

Were Frankau's poetry one long hymn of hate, it would only be worth reading as a necessary corrective to the cherished myth that Tommy and Fritz were brothers-in-arms. But Frankau is much more compelling when he stops denouncing the Germans. Despite its title, 'The Other Side' has nothing to say about the beasts in grey, and more about attitudes in Blighty. The speaker of the poem is reacting to a book of verse sent to him by 'a former subaltern of his battery' who has somehow got back to England. His response is to condemn the florid rhetoric and abstract musings of this representative soldier-poet:

My grief, but we’re fed up to the back teeth
With war-books, war-verse, all the eye-wash stuff
That seems to please the idiots at home.
You know the kind of thing, or used to know:
‘Heroes who laugh while Fritz is strafing them’—
(I don’t remember that you found it fun,
The day they shelled us out of Blauwport Farm!)
[…]

But what's the good of war-books, if they fail
To give civilian-readers an idea
Of what life is like in the firing-line…

You might have done that much; from you, at least,
I thought we’d get an inkling of the truth.
But no; you rant and rattle, beat your drum.
And blow your two-penny trumpet like the rest:
‘Red battle’s glory,’ ‘Honour’s utmost task,’
‘Gay jesting faces of undaunted boys,’…
The same old Boy's-Own-Paper balderdash!

The kinds of poetry which Frankau here attacks (and which Arthur Graeme West had also attacked in 'God! How I hate you, you young cheerful men!') have now disappeared from the canon, leaving the impression that all soldier-poetry of the First World War was characterised by resistance and bitterness. But as the attacks themselves make clear, the bulk of the War's soldier-poetry continued to celebrate honour, glory, and a divinely-sanctioned patriotism. Modern readers tend to dismiss and despise such sentimentality, while clinging to the belief that the soldiers of either side felt no animosity towards their counterparts across no-man's-land. Frankau's poetry provides a valuable, if disconcerting, corrective to that equally sentimental but far more fashionable myth.
Posted by Tim Kendall at 10:49