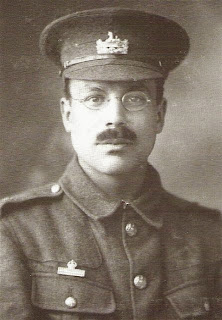 Thanks to the work of my PhD student, Grant Repshire, the papers of F. W. Harvey will be made available to the public later this month at the Gloucestershire Archives. Grant's project is the result of a collaboration between the University of Exeter, the Archives, and the F. W. Harvey Society and Estate. As well as curating and cataloguing the collection, Grant is preparing a full doctoral thesis in the form of a new biography. Harvey's papers include an unpublished novel (due to appear from the History Press in 2014), poetry notebooks, scrapbooks, and correspondence. Among the treasures are many previously unseen letters from Harvey's close friend, Ivor Gurney.

Harvey survived the War, having been captured in 1916 during a daring solo trench raid. As a POW, he was moved from camp to camp, and later wrote about his experiences in Comrades in Captivity. There were, of course, the obligatory escape attempts, including a leap from a moving train which resulted in swift recapture. There was also the opportunity to write poems: the various commandants were civilised enough to allow Harvey to send home his work, where it was published to great acclaim. Many of those POW poems are collected in this edition, and one or two and can be found online here.

The wonders of social technology mean that you can now follow F. W. Harvey on Twitter (@FWHarvey), where he will tell you all about his incarceration, his inspirational role in the first trench newspaper (which, contrary to received opinion, was not The Wipers Times), his love of cricket, and much else besides.
P.S. Grant emails to tell me that Harvey's Gloucestershire Friends: Poems from a German Prison Camp can be read online here.
Posted by Tim Kendall at 19:26