Combat Gnosticism and the Woman Poets of the First World War 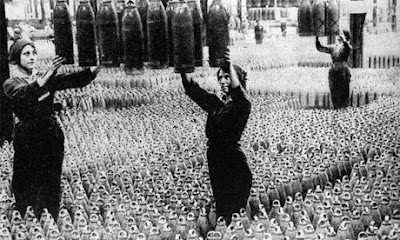 James Campbell's 'Combat Gnosticism: The Ideology of First World War Poetry Criticism' ranks among the best and most provocative essays I have read on the poetry of the First World War. If you have access through Project Muse (linked above), I strongly recommend the essay in its entirety, because I can only do limited justice to it here.
Campbell makes a case that the canon of war poetry is founded on what he calls 'combat gnosticism' --- that is, 'the belief that combat represents a qualitatively separate order of existence that is difficult if not impossible to communicate to any who have not undergone an identical experience'. Failing to critique this ideology, scholarship has merely replicated it. Campbell concludes that 'trench lyric criticism has itself striven to become the trench lyric in prose form.'
A great deal of Campbell's argument seems absolutely right. He points out that 'Dulce et Decorum Est' has been overrated because of its extreme (but as Campbell shows, problematic) claims to realism, with better poems relegated to the supporting cast. Campbell is also very good at exposing the extra-aesthetic reasons why some of these poems are valorised; readers understand them as pieces of documentary evidence rather than art. (Ironically, many would level the same criticism at those poems which Campbell wants to see added to the canon.) There is, for example, a danger that Wilfred Owen's claims to present 'Truth' raise his works above criticism, as when Seamus Heaney worries that his occasional complaints about Owen's poetry are 'prissy' and 'trivial' compared with 'what lay behind [Owen's] words'.
I start to feel uneasy about Campbell's argument when he embraces what he calls 'feminist stud[ies] of war literature' as an aid to his argument about canonical bias. His silent shift from 'poetry' to 'literature' is strategic. The case that there were significant women writers engaging with the First World War is unanswerable, but the case that there were significant women poets is less easily made. The feminist critic Jan Montefiore has dismissed women's poetry of the war as 'bad' because scarred with 'literary cliches'. I think that Charlotte Mew's achievement bears comparison with any soldier-poet's, but she only wrote three short poems explicitly about the war and her place in studies of war poetry is therefore peripheral. Finding anthologies of women's war poetry 'useful in suggesting the extent and variety of women's verse', Simon Featherstone has argued that they lack poets as challenging as Owen or (for that matter) prose writers like Virginia Woolf and Elizabeth Bowen:the anthologies 'provided ample evidence of women's poetic activity during the wars, but response to that activity, on the whole, was limited to an acknowledgement of its presence rather than a sustained engagement with the poetry itself.'
The conspiracy theory that women poets (and others) have been overlooked by scholarship because of its commitment to combat gnosticism collapses, then, on purely aesthetic grounds. Most combatant-poets are now forgotten: however 'gnostic' their work, it isn't good enough to survive. If Owen had written bad poetry, his truth-telling claims would be irrelevant. The promotion of combat gnosticism has only been possible because it has not excluded significant voices or contradicted value judgements. Cause and effect have been muddled up in Campbell's argument. Were there a woman war poet the equal of Virginia Woolf, combat gnosticism would have been unsustainable as a canon-forming ideology. If Campbell believes that women poets have been unfairly ignored, why does he fail to name a single one except to join the condemnation of that eternally useful straw woman, Jessie Pope?
The quiet expansion of the war poetry canon in the last two decades must be welcome, although there is very little evidence that it has assimilated poets important enough to bring about a radical change in our perception of the war's finest poetry. Scars upon my Heart, Catherine Reilly's anthology of First World War women poets, is highly uneven in quality, as even the introduction by Judith Kazantzis seems to concede. However, it introduced me and many others to the works of Margaret Postgate Cole and May Wedderburn Cannan, two poets who belong in those anthologies of First World War verse which offer a home to the best of both sexes.
Posted by Tim Kendall at 18:01