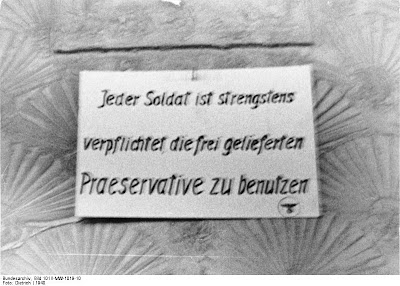 A story about French brothels during the Second World War will have to serve as sufficient cause to write something about French brothels during the First. Robert Graves, in Goodbye to All That, reports that there were two kinds of brothels: a 'blue lamp' for officers and a 'red lamp' for men. Graves wonders wrily whether the Blue Lamp women 'had to show any particular qualifications for their higher social ranking'.

The best poem I've read about wartime brothels is a sonnet by John Allan Wyeth, an American poet of the First World War recently re-discovered by BJ Omanson and Dana Gioia. Wyeth's sole publication was This Man's Army: A War in Fifty-Odd Sonnets, a superb book to which I'll return in a future blogpost. Published in 1928, the book disappeared virtually without trace until being reissued to great acclaim last year.
The sonnet in question opens diligently enough as the girls 'defile' (rather than 'file') 'Into the sordid room'. They are described as 'dreary mimes, unhappy and impure'. But Wyeth is brilliant at stringing slangy interlingual idioms across sonnet lines; the brothel Madame's reply to the clients' request for champagne --- 'tout d'suite / Messieurs' --- is met hilariously with 'Toot sweet is right'. The final lines, as a girl makes her obligatory approach to the poet, plunge into desolate longing:

---"Allô, chéri"---a low voice sleek with guile---
here come her thin arms and the ancient lure
of pathos in her unfamiliar eyes.

This is made even more dreadful by the inescapable memory of Wyeth's opening sonnet, in which he says farewell to his mother before sailing for Europe:

our almost happy casual embrace,
your strange "A...dieu," and as you go away
my dreary smile and your appalling eyes.

The casual embrace with the mother becomes a casual embrace with that haunted girl, all the more powerfully prefigured by the mother's broken French. Appalling eyes at parting become unfamiliar eyes at a parodic reunion. What the poet wants is mother love, and he finds some horrible sexualised version of it in the brothel.
Posted by Tim Kendall at 12:46