Richard Lovelace: 'To Lucasta, Going to the Wars' 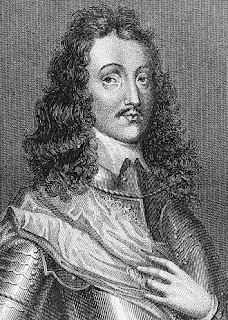 Richard Lovelace (1618-c.1658), described by a contemporary as 'the most amiable and beautiful person that ever eye beheld', fell from privilege into desperate poverty during his short life.

The reason was the English Civil War. Lovelace remained loyal to the King, having served him as 'gentleman wayter extraordinary' from the age of 13. He was imprisoned briefly in 1642 after presenting a Royalist manifesto to Parliament, and imprisoned again five years later for his part in Royalist disturbances. While in prison, he prepared the Lucasta poems for publication. But he was broken and ruined by his experiences, and spent his final years as 'the object of charity', lodging in 'obscure and dirty places'. His exact date of death is unknown, but he was reported by John Aubrey to have died in a cellar in Long Acre.

To Lucasta, Going to the Wars

1
Tell me not (Sweet) I am unkind,
That from the Nunnery
Of thy chaste breast, and quiet mind,
To War and Arms I flee.

2
True, a new Mistress now I chase,
The first Foe in the Field;
And with a stronger Faith embrace
A Sword, a Horse, a Shield.

3
Yet this inconstancy is such
As you too shall adore;
I could not love thee, Dear, so much,
Loved I not Honour more.

'Lucasta' is derived from the Latin meaning 'pure light', and therefore she shares with women addressed by Lovelace elsewhere in his work --- Amarantha ('Immortal') and Althea ('Truth') --- an idealised abstraction. The reference to the 'Nunnery', and to a single 'breast' (not 'breasts') ensures that this relationship is taken out of the sexual domain. ('Get thee to a nunnery', Hamlet tells Ophelia.) It is the 'new Mistress' who excites the passions, with the prospect offered by that consummatory rhyme 'chase /embrace'. The poet is untrue in pursuit of a greater desire: the desire for those Virgilian 'Arms'.

The third stanza starts as an attempt at reconciliation, only to end by uneasily justifying the sense of competition and the greater appeal of Mars over Venus. 'Honour' is a concept which applies as much to the battlefield as to love. It is the poet's love of Honour which allows him to love Lucasta 'so much', with the implication that if he were to stay with her it would show a lesser love. By avowing his commitment to Honour before all else, he attempts to show that he is being true to Lucasta in the act of abandoning her.

Postscript: if this account has been helpful to you, please consider following the blog via the link in the right-hand margin.
Posted by Tim Kendall at 08:09