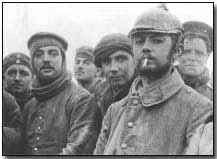 The Christmas Truce of 1914 brought soldiers together in No-Man's-Land to exchange cigarettes and drinks, play football, sing hymns together, and talk about their families. Christmas is something of an embarrassment for those who wage war: the Tommies and Fritzes who climbed out of their trenches were acknowledging an authority higher than their own military leaders.

Thomas Hardy's 'A Christmas Ghost-Story' is a Boer War poem which sets in opposition the Christian message and the unChristian nature of war. Its publication was enough to outrage the Daily Chronicle, which, with an absence of self-awareness most kindly described as comical, chose Christmas Day, 1899, as the right time to denounce Hardy as a 'pacifist'.

South of the Line, inland from far Durban,
A mouldering soldier lies---your countryman.
Awry and doubled up are his gray bones,
And on the breeze his puzzled phantom moans
Nightly to clear Canopus: 'I would know
By whom and when the All-Earth-gladdening Law
Of peace, brought in by that Man Crucified,
Was ruled to be inept, and set aside?
And what of logic or of truth appears
In tacking "Anno Domini" to the years?
Near twenty-hundred liveried thus have hied,
But tarries yet the Cause for which He died.'
Christmas Eve, 1899.

Hardy later allowed the poem to be republished in an anti-war periodical. Quite what the Church made of it, one can only guess, but the poet was not content to leave the matter there. Two months later he reported a conversation with a 'religious man': 'I said, We the civilized world have given Christianity a fair trial for nearly 2000 years, & it has not yet taught countries the rudimentary virtue of keeping peace.'

Yet 'A Christmas Ghost-Story' is a problematic poem. Hardy's prosopopoeia, by which he forces his own political views into the mouth of a dead soldier, is ethically dubious. Compare McCrae's 'In Flanders Fields', from the Great War: McCrae, like Hardy, claims to speak for the dead ('We are the Dead'), yet he burdens them with the argument that the war should be fought to the bitter end lest 'ye break faith with us who die'. Both poems are propaganda, one against war, and one for it, and both enlist the authority of the dead soldier (or soldiers) to protect their own agenda from attack. After all, who would dare argue against those who have made the ultimate sacrifice?