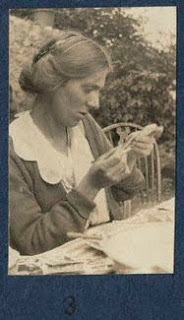 A number of Great War poets prove that it is possible to write one short masterpiece and nothing else of any note. In the case of Patrick Shaw Stewart and Julian Grenfell, their early deaths allow speculation that they might have written more, had they lived. That excuse will hardly serve for Laurence Binyon: all that survives of his countless collections of verse is one stanza from one poem. John McCrae has fared only fractionally better: two of his stanzas are known and loved. These canonical oddities cannot be ignored by anthologists --- Jon Silkin even pays Grenfell the reluctant compliment of including him under protest --- and yet there is no possibility of talking about poetic development or the peculiarities of a unique voice. The poems resist all the usual blandishments of literary criticism.

Fredegond Shove (1889-1949), pictured right, does not deserve to be elevated even to these not-especially-exalted heights. If her work is encountered at all, it is probably via Ralph Vaughan Williams's song cycle, 'Four Poems by Fredegond Shove'. (As luck would have it, Shove was the niece of Vaughan Williams's first wife.) Fredegond Shove provides a case-study in how poems can linger at the edge of the canon, handed down from anthologist to anthologist, long after the poet herself has been forgotten.

Shove was well-connected. After her father's death, her mother married Charles Darwin's son, Francis, and she herself married the anti-Keynesian economist, Gerald Shove. A sense of her social milieu comes from the fact that the photograph above was taken by Ottoline Morrell, some of whose other images of the Shoves can be found here. Sir Edward Marsh included four poems by Shove in the 1918-19 edition of Georgian Poetry. Then, her work disappeared, almost. One poem turned up in Ian Parsons' Men Who March Away, and that same poem was reprinted by George Walter in his Penguin Book of First World War Poetry. Anthologists read anthologists. Perhaps Walter agreed that it is the only poem by Shove worth saving. Perhaps, given the paucity of good women poets writing about the war, and given, too, the unspoken politics of anthologising, editors of First World War poetry are especially keen to accommodate the works of women poets.

I had better find out for myself, by reading all Shove's work, before my own anthology of Great War poetry is submitted to Oxford.

Here is the poem, anthologised as 'The Farmer' by Parsons and 'The Farmer, 1917' by Walter. Please post below your comments on its worth. For the record, it seems very ordinary to me.

I see a farmer walking by himself
In the ploughed field, returning like the day
To his dark nest. The plovers circle round
In the gray sky; the blackbird calls; the thrush
Still sings---but all the rest have gone to sleep.
I see the farmer coming up the field,
Where the new corn is sown, but not yet sprung;
He seems to be the only man alive
And thinking through the twilight of this world.
I know that there is war behind those hills,
And I surmise, but cannot see the dead,
And cannot see the living in their midst---
So awfully and madly knit with death.
I cannot feel, but know that there is war,
And has been now for three eternal years,
Behind the subtle cinctures of those hills.
I see the farmer coming up the field,
And as I look, imagination lifts
The sullen veil of alternating cloud,
And I am stunned by what I see behind
His solemn and uncompromising form:
Wide hosts of men who once could walk like him
In freedom, quite alone with night and day,
Uncounted shapes of living flesh and bone,
Worn dull, quenched dry, gone blind and sick, with war;
And they are him and he is one with them;
They see him as he travels up the field.
O God, how lonely freedom seems to-day!
O single farmer walking through the world,
They bless the seed in you that earth shall reap,
When they, their countless lives, and all their thoughts,
Lie scattered by the storm: when peace shall come
With stillness, and long shivers, after death.
Posted by Tim Kendall at 18:47