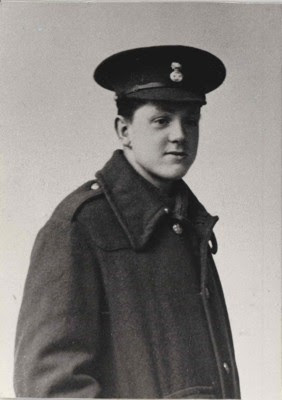 'To attempt to explain, in such a note as this, is futile.' Such was T S Eliot's warning when he added a laudatory introduction to David Jones's In Parenthesis (1937). I see no reason to promise more than Eliot, but in this blogpost I aim to gather some of the online resources which may help to guide readers through what Eliot considered to be 'a work of genius'.

Jones took several decades to find the right form for In Parenthesis. He had served during the War as a private in the Royal Welch Fusiliers, coming nearest to a fellow poet when (as the two men established many years later) his company once relieved Siegfried Sassoon's. In Parenthesis ends in Mametz Wood, where Jones himself was shot and wounded. After the War, he attempted to convey his experiences through visual art: 'Part of me, the artist within me, has never left the trenches'. But although he excelled as a painter and an engraver, Jones remained dissatisfied with his work until finally inventing a new literary form capable of such a task. The drafts record the drama of that struggle.

It has to be acknowledged that there are two major (and related) obstacles for Jones's audience. In Parenthesis is, from orthodox perspectives, a fiendishly difficult text; and it earns that overused label, sui generis. A contemporary readership is given few if any bearings. What sort of text are we wrestling with? Neither novel nor poem but held in parentheses between them, Jones's hybrid exposes the sameness and formal conservatism of all but a few subsequent writers. That tends not to be a successful career move. Wordsworth believed that great poets create the taste by which they are to be appreciated, and in that single respect, Jones seems to have failed, until now at least. Eliot could optimistically state in 1961 that In Parenthesis would be 'widely enough known in time'. The best reviewers of Jones today (such as David Wheatley and Alex Preston) repeat the mantra that Jones is scandalously neglected, and continue to hope for better.

Perhaps that hope is justified. Jones's work has always attracted a brilliant scholarly cult (although I agree with George Simmers, contra most scholars, that Jones's version of the modernist 'mythic method' is the least interesting thing about In Parenthesis, and blights his later poem, The Anathemata). However, his influence on creative writers has seemed negligible. The most significant exception is (as ever) Geoffrey Hill. A powerful advocate for Rosenberg and Gurney, Hill keeps such silence in respect of David Jones that even the least Bloomian of his readers ought to grow suspicious. A recent lecture by Hill praised Jones in passing, but to date Hill has published virtually nothing on Jones's work, despite passages like this:

The memory lets escape what is over and above---
as spilled bitterness, unmeasured, poured-out,
and again drenched down---demoniac-pouring:
who grins who pours to fill flood and super-flow insensately,
pint-pot---from milliard-quart measure.

This is pure Hill. Proto-Hill, I ought to say. It comes from Part 7 of In Parenthesis. 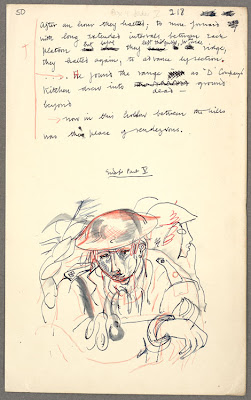 If Hill's prominence, and our increasing familiarity with his voice, offer one way of approaching In Parenthesis, so much the better. But In Parenthesis comprises multiple voices, sudden shifts in perspective, characters which appear and disappear --- the whole making a 'shape in words' as Jones called it, but a shape the like of which has never previously been encountered.

In Parenthesis has strong claims to be the literary masterpiece of the War. Read it, one part per day for seven days, and don't stop for what you don't understand. Ignore Jones's notes until you read it a second and a third time. Beyond that, I must admit as Eliot admits: 'All that one can say amounts only to pointing towards the book, and affirming its importance and permanence as a work of art.'
Posted by Tim Kendall at 17:46