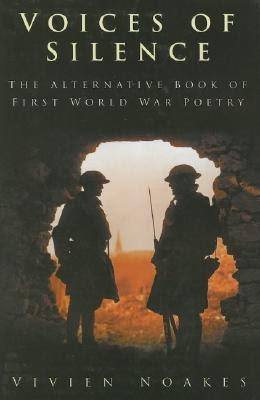 Vivien Noakes, who died in February this year, was one of the best editors of her generation. Her variorum edition of Isaac Rosenberg's poems and plays is a model of good textual practice, and her anthology Voices of Silence revivified the canon of First World War poetry by focusing on the work of 'less gifted writers' who created 'a body of rich, exciting, often deeply moving work that complements the established literary canon'. Some of her poets risk being undersold even by that description---Borden, Gibson, Cannan, Service, and one or two others were significant poets who ought to appear in any anthology of the War. What is most striking about Noakes's 'alternative' anthology, compared with competitors which are marketed as mainstream, is the amount of light verse included in it. So inured are we to the horrors of the battlefield that we can hardly allow soldiers to have been cracking jokes, or writing limericks, or singing bawdy songs on the Western Front. Comedy and light verse have been squeezed out of the canon because they unsettle our prejudices about what the War was like. One of Noakes's greatest contributions in Voices of Silence is to insist the comedy was central to the soldiers' experiences.

I had only come across Edward de Stein's work once before. He has a short and unexceptional poem in Brian Gardner's Up the Line to Death. Gardner also quotes de Stein's account of 'the perpetual sense of the ridiculous which, even under the most appalling conditions, never seemed to desert the men with whom I was privileged to serve, and which indeed seemed to flourish more freely in the mud and rain of the front line than in the comparative comfort of billets.' Nothing of that is conveyed by the poem in Gardner's anthology, but Noakes selects more generously and wisely. I particularly enjoyed de Stein's 'The Romance of Place-Names', which first appeared in Punch a month before the end of the War.

The Romance of Place-Names
('Many of the names now given to places in the battle-area will survive the war', Daily Paper. This should give a great chance to the Picardy poet of the future.)

The leafy glades of 'Maida Vale'
Are bright with bursting may,
And daffodils and violets pale
Bedew 'The Milky Way';
There's perfect peace in 'Regent Street',
In 'Holborn' rural charm,
But nowhere smells the Spring so sweet
As down by 'Stinking Farm'.

As I rode through 'Dead Cow Lane',
Beneath the dungeon keep
Of 'Wobbly House' that tops the plain,
I saw a maiden peep;
Her glance was like the dappled doe's,
She blushed with shy alarm,
As pink as any Rambler-rose
That climbs at 'Stinking Farm'.

O maiden, if it be my fate
To win so great a boon,
At 'Hell-fire Corner' I will wait
Beneath the silver moon;
I'll swear no maid but thee I know
As softly arm-in-arm
Along the 'Blarney Road' we go
That leads to 'Stinking Farm'.

And we will wander, O my Queen,
By many a mossy nook,
Where limpid waters flow between
The banks of 'Beery Brook';
In 'Purgatory' we will roam
Where blow the breezes warm,
If thou wilt come and make thy home,
O sweet, at 'Stinking Farm'.
Posted by Tim Kendall at 20:18