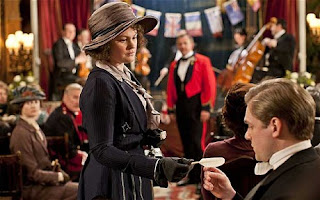 I have never watched Downton Abbey, but I was fascinated to read the reaction of one Telegraph reviewer to last Sunday's episode, in which a woman of the White Feather Campaign handed feathers to men who hadn't enlisted. Michael Deacon, the reviewer in question, argues that soldiers did not share that resentment, and (courtesy of two misogynistic moments from Owen and Sassoon) that they directed their anger more often at women. His case is problematic.

2. I suspect that most women were opposed to the actions of the feather girls (see below); and it's undoubtedly true that the White Feather campaign has been criticised out of all proportion to its numbers of participants. Like Jessie Pope, it is a strategically useful target.

3. It seems odd (to put it kindly) to try to win an argument by uncritically recruiting misogynistic comments for support. Deacon assumes, purely on the basis of two quotations hostile to women, that the soldiers did not object to their able-bodied counterparts' refusals to fight. For every poem which Deacon can find attacking women, I guarantee I can show him twice as many poems by soldier-poets attacking pacifists.

4. Deacon claims that the feather girls shared 'the delusion' that the Great War was 'some glorious game'. On the contrary, they understood exactly what was at stake, which was why they were prepared to shame men into enlisting. We may disapprove of their methods, but for them the War was no game.

Many of the comments below Deacon's article slip into misogyny. Many more of them restate the old and now discredited view of the War as futile and unnecessary. It will be interesting to see how media organisations like the BBC talk about the War during the centenary years, because it looks like the historians have not managed to make much headway so far.

Here is Helen Hamilton's wartime assault on the white feather brigade. As poetry, it's terrible; but as social commentary it is satisfyingly robust.

Jingo-woman
(How I dislike you!)
Dealer in white feathers,
Insulter, self-appointed,
Of all the men you meet,
Not dressed in uniform,
When to your mind,
A sorry mind),
They should be,
The test
The judgment of your eye,
That wild, infuriate eye,
Whose glance, so you declare,
Reveals unerringly,
Who's good for military service.
Oh! exasperating woman,
I'd like to wring your neck,
I really would!
You make all women seem such duffers!
Besides exemptions,
Enforced and held reluctantly,
---Not that you'll believe it---
You must know surely
Men there are, and young men too,
Physically not fit to serve,
Who look in their civilian garb
Quite stout and hearty.
And most of whom, I'll wager,
Have been rejected several times.
How keen, though, your delight,
Keen and malignant,
Should one offer you his seat,
In crowded bus or train,
Thus giving you the chance to say,
In cold, incisive tones of scorn:
'No I much prefer to stand
As you, young man, are not in khaki!'
Heavens! I wonder you're alive!
Oh, these men,
These twice-insulted men,
What iron self-control they show,
What wonderful forbearance!

But still the day may come
For you to prove yourself
As sacrificial as upbraiding.
So far they are not taking us
But if the war goes on much longer
They might,
Nay more,
They must,
When the last man has gone.
And if and when that dark day dawns,
You'll join up first, of course,
Without waiting to be fetched.
But in the meantime,
Do hold your tongue!
You shame us women.
Can't you see it isn't decent,
To flout and goad men into doing,
What is not asked of you?
Posted by Tim Kendall at 11:03