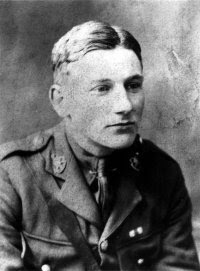 Edmund Blunden is a war poet about whom I have said next to nothing on this blog. His work will not pass out of copyright in the UK until 2045, which is a long time to wait. So---taking his death date of 20 January 1974 as the slenderest of hooks---I now comment on his achievement via some of the resources which are freely available online. The best of these are the official website, including such gems as a recording of Blunden reading one of his war poems, and the large Edmund Blunden Collection at the First World War Digital Archive.

His biographer, Barry Webb, has suggested that Blunden ‘spent more time in the trenches than any other recognised war writer’. He came through two years at Festubert, Ypres and Passchendaele unscathed, and was awarded the Military Cross in 1916 after reaching the German line on a reconnaissance mission. During a distinguised post-war academic career, Blunden became a champion of war poetry. He edited Owen (1931) and Gurney (1954), wrote the foreword to Frederick Brereton's An Anthology of War Poems (1930) and Brian Gardner's Up the Line to Death (1964), and at Merton College, Oxford, tutored Keith Douglas, who would become the most brilliant poet of the Second World War.

As for his own work, Blunden remained unfailingly modest. In his prose memoir, Undertones of War (1928), he recalled his youthful self as a 'harmless young shepherd in a soldier's coat'. The pastoral and the martial pull against each other in all his best poetry. Blunden often gives the impression that he wants to be nothing more than a minor Georgian, complete with archaic diction and mellifluous syntactical inversions; but like his friend Siegfried Sassoon, he is transformed into a significant poet at the point when the War forces him to confront a more modern and brutal world. It is artistically regrettable---if psychologically explicable---to find that in The Waggoner (1920) the 'harmless young shepherd' should have so quickly and thoroughly usurped the soldier.

The reprieve was temporary; the War never released Blunden. 'I must go over the ground again', he wrote in Undertones of War, and spoke of a similar compulsion in an interview from the 1960s: 'My experiences in the First World War have haunted me all my life and for many days I have, it seemed, lived in that world rather than this.' Where his wartime poems juxtapose soldier and shepherd, the best of his post-war work creates a similar juxtaposition of past and present, soldier and veteran. Blunden is not a poet of protest like Sassoon, or a poet of witness like Owen, or a documentary poet as Gurney and Jones can sometimes be. Blunden is one of the great poets of memory: of what can and cannot be remembered; of what must be remembered; of what would be better forgotten if only that were possible. The act of remembering is itself the drama of his poetry. 'Can you Remember?', written in January 1936, begins with the promise that the poet can 'still remember / The whole thing in a way', although there are gaps and hesitations: 'Edge and exactitude / Depend on the day'. Place-names, Blunden goes on to admit, may be forgotten. But the scene can become suddenly and unexpectedly vivid with an intensity which will not distinguish the happy from the horrific:

at the instance
Of sound, smell, change and stir
New-old shapes for ever
Intensely recur.

And some are sparkling, laughing, singing,
Young, heroic, mild;
And some incurable, twisted,
Shrieking, dumb, defiled.

And so on, until Blunden's final poem, 'Ancre Sunshine', which Rennie Parker and Margi Blunden have called 'the last poem about the war published by any surviving soldier poet'. Visiting the battlefields with his wife fifty years later, Blunden ends his poem with a luminous vision:

All that had fallen was in its old form still,
For her to witness, with no cold surprise,
In one of those moments when nothing dies.
Posted by Tim Kendall at 08:49