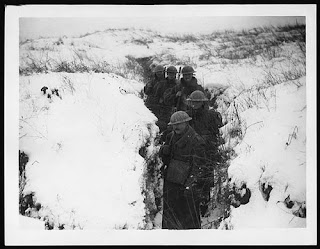 On 4 February 1917, Wilfred Owen sent home his account of a recent tour of the ‘advanced Front Line’: ‘The marvel is that we did not all die of cold. As a matter of fact, only one of my party actually froze to death before he could be got back’. The platoon had been caught under bombardment and  left  'marooned on a frozen desert' as high explosives fell around them. Owen was able to sleep briefly, but he woke believing himself in hell.

This episode directly inspired two of his best-known poems: ‘Exposure’ and ‘Futility’. He wrote the second of these in May 1918 at Ripon; the surviving manuscripts are remarkably neat, suggesting that the poem came quickly in something close to its finished form. Owen was an inveterate reviser, but this time few revisions were needed. 'Futility' became one of only five of Owen's poems to have been published during his lifetime: it appeared in the Nation on 15 June 1918.

Move him into the sun—
Gently its touch awoke him once,
At home, whispering of fields half-sown.
Always it woke him, even in France,
Until this morning and this snow.
If anything might rouse him now
The kind old sun will know.

Think how it wakes the seeds—
Woke once the clays of a cold star.
Are limbs, so dear achieved, are sides
Full-nerved, still warm, too hard to stir?
Was it for this the clay grew tall?
—O what made fatuous sunbeams toil
To break earth’s sleep at all?

'Was it for this the clay grew tall?' The phrasing is Wordsworthian, remembering lines from Book 1 of The Prelude: ‘Was it for this / That one, the fairest of all rivers, loved / To blend his murmurs with my nurse’s song…?’ Wordsworth's self-disgust contrasts mediocre adulthood with the glorious riches of his infancy and youth. 'Futility' jabs its finger not at individual agency but at universal forces which seem benign but are only 'fatuous'. They 'woke the clays of a cold star', but the human clay which is the immediate subject of Owen's poem cannot be woken. The sun is what Beckett's Hamm would later call an 'accursed progenitor', its kindness a waste which verges on abuse. The poem's title insists that it is futile to hope that those limbs will 'stir'; more than that, life is itself an exercise in futility. The question directed at whatever made those fatuous sunbeams toil is: why bother? 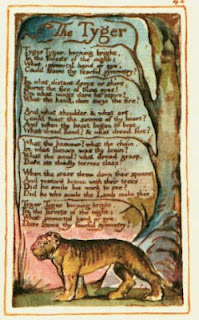 In this respect, 'Futility' has always seemed to me a counterpart of Blake's 'The Tyger'. Blake's poem constitutes a terrifying argument from design: examine the 'fearful symmetry' of the tyger, and draw your own conclusions about the 'immortal hand or eye' capable of shaping such a beast. Owen replaces terror with contempt: what kind of idiot creator would have gone to so much effort only to see that work squandered by such destruction? As the Romanian philosopher E. M. Cioran put it, 'There is no means of proving it is preferable to be than not to be'. 'Futility' comes close to proving the opposite. Who would not prefer the unrealised potential of 'earth's sleep' to the gruesome pantomine by which the clay grows tall and 'full-nerved' only to be cruelly and unnecessarily razed?

N. B. For any victims of AQA's conflict cluster, here are accounts of Ted Hughes's 'Bayonet Charge' and Jane Weir's 'Poppies'. And here is my reading of Owen's 'Dulce et Decorum Est'.
Posted by Tim Kendall at 11:23