John Jarmain: Flowers in the Minefields 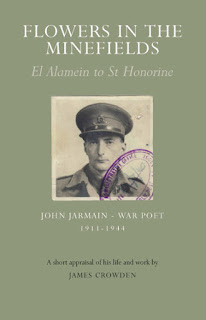 John Jarmain, novelist and poet, was killed in Normandy within a month of D-Day. He had already enjoyed several lucky escapes during the desert campaign and in Italy. That luck ran out on 26 June 1944, when he came under German mortar bombardment in the village of St Honorine and was fatally wounded by a piece of shrapnel as he dived for a slit-trench.

At that time, Jarmain was known as the author of one novel, Priddy Barrows. His poems were published posthumously in late 1945 and attracted positive notices, but soon disappeared except for the occasional sighting in anthologies of Second World War poetry.

Only now, with the publication of this superb new edition by the indefatigable James Crowden under his own Flagon Press imprint, can Jarmain's achievement be properly appreciated. The book collects Jarmain's poems along with essays by two of his military friends; Crowden also provides generous selections of photographs, and annotations of individual poems combine his own knowledge as an ex-officer with what has clearly been a forensic examination of Jarmain's life and works. If you want to know the angle at which a Stuka dives, James Crowden is the perfect editor, but he will also tell you where and when the poems were written and how they work as poems. Jarmain's work is enhanced by this attention: he was, undeniably, an uneven poet, but at his best he belonged among the finest of the War.

Seventy years ago, give or take a day or two, Jarmain settled down to write 'New Year, 1943' at El Agheila. In it, he described himself standing 'tall and alone', only a 'shadow in an empty place' but making his 'lonely sign':

Not to the year to come, the year that's gone,
Not to the unimpassioned fields of space,
But for myself, because the tale runs on;
Because in this notch of time on the small round earth,
Quite close across a little friendly sea
One like myself has watched and answers me.
Posted by Tim Kendall at 20:27