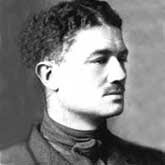 Like his fellow Old Etonian Patrick Shaw-Stewart, Julian Grenfell (1888-1915) is remembered today for just one poem. That poem is 'Into Battle', one of the finest lyrics of the Great War. Yet its reception history has been uneven. Second in popularity only to Brooke's 'The Soldier' during and immediately after the War, 'Into Battle' is now either awkwardly ignored or explicitly condemned. When Jon Silkin included it in his Penguin Book of First World War Poetry, he marked its title with an asterisk in the contents page, explaining that he 'dissented from the implied judgments of taste' of the poem's admirers. At least Silkin was candid. Grenfell is often patronised by those who, wanting all war poetry to sound the same, cannot allow contrary views. They conclude that Grenfell would have come round to their right way of thinking had he lived longer.

Grenfell loved the thrill of battle: 'I adore war. It's like a big picnic without the objectlessness of a picnic... The fighting excitement vitalises everything... One loves one's fellow-man so much more when one is bent on killing him.' He specialised in stalking and sniping, and the same game-book which recorded his partridge-shooting on his parents' estate was used to keep a tally of 'pomeranians'.

Grenfell's war service was brought to a sudden halt in May 1915 when, as he reported phlegmatically in his last letter to his mother, he ‘stopped a Jack Johnson with [his] head’. He died from his wounds a fortnight later.

I take as my text the version published in Elizabeth Vandiver's Stand in the Trench, Achilles, pp. 184-85.

The naked earth is warm with spring,
And with green grass and bursting trees
Leans to the sun's gaze glorying,
And quivers in the loving breeze;
And life is Colour and Warmth and Light,
And a striving evermore for these;
And he is dead who will not fight;
And who dies fighting has increase.

The fighting man shall from the sun
Take warmth, and life from the glowing earth;
Speed with the light-foot winds to run,
And with the trees a newer birth;
And find, when fighting shall be done,
Great rest, and fullness after dearth.

All the bright company of Heaven
Hold him in their high comradeship---
The Dog-star, and the Sisters Seven,
Orion's Belt and sworded hip.

The woodland trees that stand together,
They stand to him each one a friend;
They gently speak in the windy weather;
They guide to valley and ridge's end.

The kestrel hovering by day,
And the little owls that call by night,
Bid him be swift and keen as they---
As keen of sound, as swift of sight.

The blackbird sings to him, 'Brother, brother,
If this be the last song you shall sing,
Sing well, for you will not sing another;
Brother, sing.'

And when the burning moment breaks,
And all things else are out of mind,
And Joy of Battle only takes
Him by the throat, and makes him blind---

Through joy and blindness he shall know,
Not caring much to know, that still
Nor lead nor steel shall reach him, so
That it be not the Destined Will.

The thundering line of battle stands,
And in the air death moans and sings;
But Day shall clasp him with strong hands,
And Night shall fold him in soft wings.
Posted by Tim Kendall at 14:19