Homosexuals in the Military 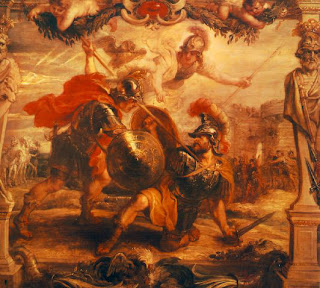 General Sheehan has made the news today for claiming that, as one headline pithily put it, 'Gay Dutch Soldiers Caused Srebrenica Massacre'. Sheehan argued that European countries which allowed 'open homosexuality' in their military had done so as part of a 'socialisation' process which led to forces being 'ill-equipped to go to war'.

General Sheehan is far too masculine and heterosexual to spend his time reading war poetry. That is a great pity, because were he to do so, he would learn that history is not on his side. For example, the Spartans encouraged homosexual relationships between soldiers because it fostered greater camaraderie on the battlefield. It has even been suggested that the 300 at Thermopylae comprised homosexual couples. Far from being associated with an unwillingness or an inability to fight, homosexuality was considered a vital component in effective soldiering.

The extent of homosociality and homoeroticism in the poetry of the First World War has been well documented. But homosexuality is present from the start in Western depictions of military prowess. When Alexander the Great visited Troy with his intimate friend Hephaestion, they paid homage to the greatest soldier of them all --- Achilles --- by drawing attention to a shared sexuality: 'Alexander garlanded the tomb of Achilles and Hephaestion that of Patroclus, the latter riddling that he was a beloved of Alexander, in just the same way as Patroclus was of Achilles.'

Of the relationship between Achilles and Patroclus, classical literature leaves us in little doubt. Aeschylus has Achilles ask his lover, 'Does not my holy reverence for your thighs move you, oh you thankless of my frequent kisses?' And it is his love of Patroclus which draws Achilles back to the battlefield in Homer's Iliad. Achilles refuses to fight after Agamemnon forces him to give up his beloved slave-wife, Briseis. However, he becomes enraged at the killing of Patroclus by Hector, and takes his terrible revenge against the defenders of the besieged city. (The closest to a modern parallel would be 'Mad Jack' Sassoon's suicidal rampages through German lines after the death of David Thomas.) General Sheehan might draw some comfort from the fact that Achilles's sexuality plays a role in his downfall. Troilus, fleeing from Achilles's sexual aggression, escapes into a Temple of Apollo, and is there slain by the warrior. Apollo punishes this transgression by guiding the arrow which will penetrate Achilles's heel.
Posted by Tim Kendall at 19:05