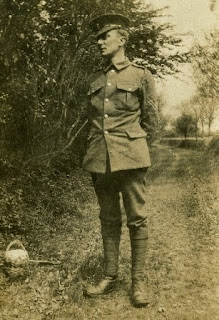 The flowers left thick at nightfall in the wood
This Eastertide call into mind the men,
Now far from home, who, with their sweethearts, should
Have gathered them and will do never again.

The manuscript of Edward Thomas's 'In Memoriam [Easter 1915]' reveals that this sophisticated four-line poem has been given its elaborate title by an editor at a later date. '6.IV.15', by comparison, is suitably bare, suitably unembellished, and it seems right for a poem which withholds more than it explicitly voices. We might quibble at the phrase 'call into mind', which may be metrically essential but only at the expense of the more natural (and less clumsily repetitive) 'call to mind'. Otherwise, the poem is a tiny marvel. It moves from abundance ('The flowers left thick') to dearth (the absent men), so that paradoxically it speaks of loss through nature's surfeit. Those men are 'far from home' eschatologically, not just geographically. They are either dead already, or they will soon be dead: they won't be coming back. As I've argued elsewhere, the last twist of the knife comes from Thomas's syntax. In its anastrophic delaying of the negative --- 'and will do never again' instead of the more customary 'and will never do again' --- the poem tantalizes by briefly imagining a replenished future ('and will do'), only to snatch that potential away with emphatic immediacy.
Posted by Tim Kendall at 07:51