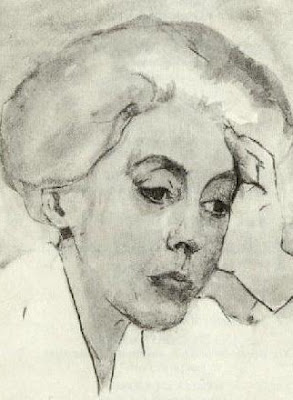 I have never understood why Charlotte Mew's achievement is so rarely celebrated. She seems to me to have been one of the very great poets of the last century. Bizarrely, her work is more likely to appear in anthologies of Victorian poetry, even though the only book published in her lifetime was The Farmer's Bride (1916, expanded 1921), most of which she wrote after 1912. Defenders of the canon often protest that identity politics should not be allowed to replace aesthetic judgements. Yet here is one of our most important poets, a woman and a lesbian, whose work continues to be overlooked by all sides because it does not lend itself to lazy categorisation.

I once enquired after the possibility of editing Mew's letters. My publisher expressed a keen interest, but the reaction of an existing editor of Mew's work, whose proprietorial senses were outraged, soon dissuaded me. A decade later, the edition which (I was assured) she was already working on seems no closer to being finished. It is a great shame. Mew's poetry is most easily available through a very poor edition by Eavan Boland, the prose is out of print, and most of the letters languish unread. Mew has been badly served, although this valuable website makes some of her work available.

I have blogged previously that Mew wrote three poems explicitly addressing the Great War. They are not quite at the level of a masterpiece like 'Madeleine in Church' (extracts here), but like that untouchably perfect monologue of religious doubt, each challenges and overturns familiar consolatory conventions. The best known of the three is 'The Cenotaph'. As an admissions tutor at Bristol, I used to set the poem as an unseen. The strongest candidates wrote brilliantly about its changing rhymes and rhythms; the worst would seem not even to notice that the lines vary in length from four syllables to 23, so determined were they to escape into a caricaturing account of the futility myth, usually with reference to 'Dulce et Decorum Est'.

Not yet will those measureless fields be green again
Where only yesterday the wild sweet blood of wonderful youth was shed;
There is a grave whose earth must hold too long, too deep a stain,
Though for ever over it we may speak as proudly as we may tread.
But here, where the watchers by lonely hearths from the thrust of an inward sword have more slowly bled,
We shall build the Cenotaph: Victory, winged, with Peace, winged too, at the column's head.
And over the stairway, at the foot---oh! here, leave desolate, passionate hands to spread
Violets, roses, and laurel with the small sweet twinkling country things
Speaking so wistfully of other Springs
From the little gardens of little places where son or sweetheart was born and bred.
In splendid sleep, with a thousand brothers
To lovers---to mothers
Here, too, lies he:
Under the purple, the green, the red,
It is all young life: it must break some women's hearts to see
Such a brave, gay coverlet to such a bed!
Only, when all is done and said,
God is not mocked and neither are the dead.
For this will stand in our Market-place---
Who'll sell, who'll buy
(Will you or I
Lie each to each with the better grace)?
While looking into every busy whore's and huckster's face
As they drive their bargains, is the Face
Of God: and some young, piteous, murdered face.

The poet excoriates herself, and at the same time acknowledges her distance: 'it must break some women's hearts'. She and her readers are among the whores and hucksters, horribly captured in that most disgusted of rhymes: buy/I/lie. God is not mocked, Galatians tells us, 'for whatsoever a man soweth, that shall he also reap'. Yet here there is no salvatory transformation. We are lost in our money-grubbing littleness, unredeemed by the deaths of those young men. Nor do they find hope of resurrection. The unknown soldier is also Christ, but his 'young, piteous, murdered face' remains unregenerated by spring.
Posted by Tim Kendall at 15:38