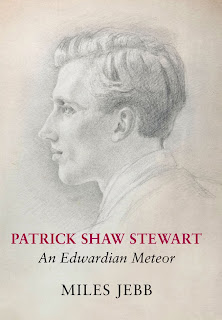 Patrick Shaw Stewart was the author of one of the finest lyrics of the First World War, and of no other poetry of note. The case for a full dress biography does not, therefore, seem compelling. Yet at 243 pages, Miles Jebb's account justifies its detail. This is the study of a remarkable man --- remarkable on his own merits, and remarkable for moving in social circles which included so many of the great men and women of the day. Shaw Stewart listed among friends and acquaintances the Asquiths, Winston Churchill, Rupert Brooke, Denis Browne, the Grenfell brothers, Ronald Knox, and Duff Cooper, and his love affair with the great beauty of the age, Lady Diana Manners, would almost certainly have been doomed even had he survived the War.

Jebb makes clear the violent contradictions in Shaw Stewart's personality. (I take Jebb's dropping of the hyphen in Shaw Stewart's name as definitive.) Here was a genius, quite capable of proving himself the greatest classicist of his generation. Yet he found time to cram for exams in the midst of a social merry-go-around which first exhausts and then begins to bore the reader. Educated at Eton and Oxford, and destined for untold riches and power at Barings Bank, Shaw Stewart moved amidst a privileged elite. In his relations with women, with the middle-classes (whom he despised and affected to ignore), and especially with Jews, he did not seem admirable. Writing about an election at All Souls, he reported that 'by the strenuous efforts of me and one or two others, the election of a Polish Jew from Balliol, much the strongest candidate really, was prevented.'

For this corrupt coterie, as they liked to call themselves, the arrival of the War proved especially tragic. Shaw Stewart was the last of his circle of friends to die, having survived Gallipoli against all odds as his comrades were killed by the dozen. Commenting on his final period of leave, Manners found his appearance 'macabre' and 'weighted with the dread of war and blackened by the deaths of his dearest friends'. He was killed at the Western Front near Cambrai on 30 December 1917. Ten years earlier he had spoken in favour of war: 'to the volunteer it is the opportunity for the most splendid self-sacrifice that it commonly falls to the lot of mankind to make... It is the possibility of war... that fosters the national spirit, the spirit of independence, the spirit of competition which is the animant spirit of the human race.'

Miles Jebb has done a great service by bringing Shaw Stewart and his group to life. My only regret is that he spends so little time on Shaw Stewart's masterpiece, 'I saw a man this morning', and his few references to it seem ambivalent: he describes it as 'rigidly in the style' of Housman's A Shropshire Lad. Rigidly? For a thorough and more appreciative treatment of that poem, and (inter alia) evidence of Shaw Stewart's compendious knowledge of salacious passages in classical texts, the study to consult is Elizabeth Vandiver's superb Stand in the Trench, Achilles.

Update: there is a very useful new website dedicated to the biography and to Shaw Stewart here.
Posted by Tim Kendall at 16:59