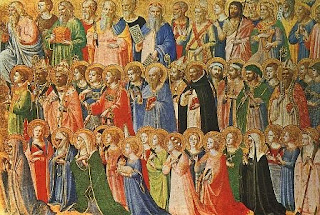 Ivor Gurney wrote far more poems about 'Toussaints' than any other time of year. I will leave aside the misspelling, and briefly consider why La Toussaint should have been so important for Gurney and (relatedly) why he should have used the French name.

La Toussaint is a much bigger festival in France than in Britain, where Hallowe'en trick-or- treating has almost completely occluded any religious significance. (As a general rule, the more Catholic the country, the more passionate the observance.) In practice, La Toussaint, 1 November, combines All Saints Day and All Souls Day as a jour ferié, or public holiday. Families attend an All Saints Mass in honour of the Catholic saints and of dead relatives.

Gurney alludes to these customs in 'Toussaints', which I publish below. 'Toussaints' is early Gurney, and cannot really be included among his best work despite its occasional power. Gurney mentions 'Toussaints' --- always misspelling it --- in at least another half-dozen later poems, mostly unpublished. The best known, which is in copyright but which can be read in the Collected Poems, is one of his greatest lyrics, 'It is near Toussaints': 'It is near Toussaints, the living and dead will say: / "Have they ended it? What has happened to Gurney?"' Incarcerated in an asylum, Gurney is lost to both living and dead. They 'batter / At doors about the farms crying "Our war poet is lost", / "Madame---no bon!"---and cry his two names, warningly, sombrely.' La Toussaint, then, becomes the day of reunion between the war survivors and the war dead, but that reunion excludes the poet himself, as he remains denied even the revenants' consolations.

Like softly clanging cymbals were
Plane-trees, poplars Autumn had
Arrayed in gloriously sad
Garments of beauty wind-astir;
It was the day of all the dead---

Toussaints. In sombre twos and threes
Between those coloured pillars went
Drab mourners. Full of presences
The air seemed... ever and anon rent
By a slow bell's solemnities.

The past year's gloriously dead
Came, folk dear to that rich earth
Had given them sustenance and birth,
Breath and dreams, and daily bread,
Took labour-sweat, returned them mirth.

Merville across the plain gleamed white,
The thronged still air never gave a sound,
Only, monotonous untoned
The bell of grief and lost delight.
Gay leaves slow fluttered to the ground.

Sudden, that sense of peace and prayer
Like vapour faded. Round the bend
Swung lines of khaki without end....
Common was water, earth and air;
Death seemed a hard thing not to mend.
Posted by Tim Kendall at 10:38