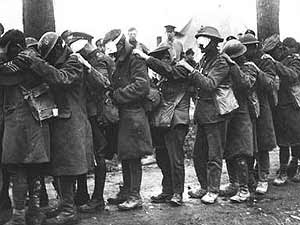 I mentioned in a previous blogpost that the popularity of 'Dulce et Decorum Est' has grown out of all proportion to its merits, and I promised to suggest reasons why that should have happened. The author of 'Miners' (which I have called 'one of the most politically radical poems of [the] age'), 'Futility', 'Strange Meeting' and 'Exposure' is, without question, a major poet. Despite sharing some of his irritation, I don't side with a scholar such as Dan Todman, who has blamed Owen for contributing to the public's distorted understanding of the War: Owen, Dan says, is 'over-rated'. I would rather argue that the distortions come from the reception of his work, and in particular from the valorising of certain poems for political reasons, at the expense of others. The poet who welcomes the War as an opportunity to effect a little useful weeding; the poet who describes the 'exultation' of going over the top and looking back to see the ground 'all crawling and wormy with wounded bodies'; the poet who swears that he will revenge himself against the Germans ('I, Owen, will repay'); the poet who writes with homoerotic passion of exposed and injured flesh; this is not the poet on whom so many school curricula linger.

What, then, explains the pre-eminence of 'Dulce et Decorum Est'? First, it meets one kind of propaganda with an equal and opposite kind. Horace's line is dismissed as 'The old Lie'. Allowing for no complexity, Owen himself is guilty of telling something less than the whole truth: dying for one's country can sometimes seem sweet and decorous, and was described as such by many of his contemporaries. Yet such is the dominance of a particular account of the War that the soldiers at the Front are not permitted to have held different views; or if they did, they were merely fooled by the establishment's discourse. Owen's message is clear and, given what the poem has previously chosen to show us, irrefutable. Outflanked because of our lack of credentials, we do not want to seem like that 'certain poetess', Jessie Pope, whose Horatian delight in battle is founded on ignorance. Who are we to take issue with the suffering soldier-poet about the truth of war?

Owen promises his reader the opportunity to join him as a witness. 'If in some smothering dreams you too could pace / Behind the wagon that we flung him in', he writes, and he goes on to describe the scene so that we can see it for ourselves. The poem becomes the smothering dream from which, after our awakening, we can authoritatively dismiss Horace's old Lie. Even while making clear that we can never experience what he has experienced, Owen takes advantage of our desire to understand. We are not like Jessie Pope. We share the poet's pain. When he suddenly interjects, 'Gas! Gas! Quick, boys!', it is as though he is including his male readers in the danger. Poetesses cannot follow him there.

Yet what if we resist those strategies? What if we do not accept the final stanza so passively?

If in some smothering dreams you too could pace
Behind the wagon that we flung him in,
And watch the white eyes writhing in his face,
His hanging face, like a devil's sick of sin;
If you could hear, at every jolt, the blood
Come gargling from the froth-corrupted lungs,
Obscene as cancer, bitter as the cud
Of vile, incurable sores on innocent tongues,---
My friend, you would not tell with such high zest
To children ardent for some desperate glory,
The old Lie: Dulce et decorum est
Pro patria mori.

This is slack writing. The description of the gassed soldier betrays Owen's reliance on mood-music. We accept that atrocity is being described, and we are expected to become suitably compliant in our appalled response. We take the poet's word for it, because it would be the ultimate act of bad faith to respond differently. Yet bad faith is exactly the problem. Owen fails because his language is too manipulative. As his master, Keats, famously put it, 'We hate poetry that has a palpable design upon us.'

In the final stanza of 'Dulce et Decorum Est', Owen becomes less the reporter and more the propagandist. He reaches for stock images of evil and suffering --- the devil, cancer --- without stopping to consider the appropriateness of the metaphor. What does a devil sick of sin look like? I don't see this image. Cancer is obscene, and so is horrific death in war, but beyond that the simile breaks down instantly: cancer is slow, and death in battle is sudden; cancer is natural, whereas death in battle represents man's inhumanity to man. Far from increasing or conveying the obscenity of the scene, the comparison with cancer only obfuscates. It is a reflex gesture. As for 'innocent tongues', would the cud be any less bitter on other kinds of tongue?

Seamus Heaney has written of his experiences in teaching this poem that 'it seems like an impertinence when we begin [...] to make pejorative critical remarks about the excessively vehement adjectives and nouns... Yet there was obviously an immense disparity between the nit-picking criticism I was conducting on the poem and the heavy price, in terms of emotional and physical suffering, the poet paid in order to bring it into being.' The appeal to, and of, the metatext---that originating event described by the poem---is the reason why war poetry has been simultaneously celebrated and ghettoised. Although it has reached far beyond the poetry-reading coteries, war poetry has always been viewed with suspicion by those canon-forming poets and scholars who detect just this kind of special pleading. As Philip Larkin admitted, 'the temporal accidents of [Owen's] lifetime... make independent critical assessment so difficult.'

'Dulce et Decorum Est' is an uneven poem for reasons which bear our scrutiny. To say so is, in a minor way, to speak the truth to power. There is nothing 'nit-picking' about that. It is tempting to stay silent when a poem supports our prejudices, or when to challenge it would be to challenge our own assumptions. But if we care about Owen's work, and the work of other war poets, then we might at least pay the compliment of questioning it, however uncomfortable that may make us feel.
Posted by Tim Kendall at 20:31