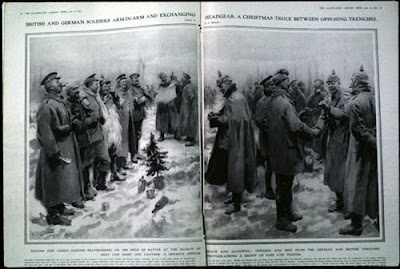 Thomas Hardy rarely missed an opportunity to express his disappointment with Christianity. War, in particular, prompted him to consider the failure of religion to act as any sort of civilising influence. A dead soldier, speaking from the battlefields of the Boer War, had complained in Hardy's 'A Christmas Ghost Story' (1899) that the 'cause for which [Christ] died' seemed to have been ruled as 'inept, and set aside'. Around the same time, Hardy told a 'religious man' that 'We the civilized world have given Christianity a fair trial for nearly 2000 years, & it has not yet taught countries the rudimentary virtue of keeping peace.'

The consistency of Hardy's thinking on this problem is measured several decades later when, in what would be his final book of poems, Winter Words in Various Moods and Metres, he included a sour little epigram.

'Peace upon earth!' was said. We sing it,
And pay a million priests to bring it.
After two thousand years of mass
We've got as far as poison-gas.

Bizarrely, the BBC has a furrow-browed Jack Dee looking at war memorials and images of 'Victims of War' before reciting the poem. By ending with an image of Mother and Child, and the solacing candles, the clip finds comfort in the very source which Hardy's poem had bitterly rejected.
Posted by Tim Kendall at 19:38